This site will not function as intended with JavaScript disabled!
Blog - Latest News
You are here: Home / ERDI Blog / Getting Rigged for Deep Diving… 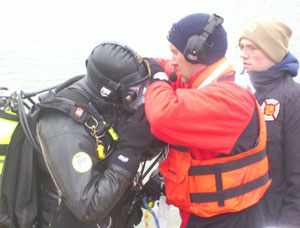 By far the majority of jobs for Public Safety Dive Teams are carried out in shallow water. Certainly it may be muddy, polluted, swiftly moving and otherwise extremely hazardous, but the added complications that come when planning for depth are not part of the usual risk analysis. But occasionally a call comes in for a “deep” recovery or search and it’s a wise PSD Team Leader who pulls out the “operations manual” specific to this type of dive.

Let’s recap for a moment the major factors that must be accounted for when a diver is called on to work at depth. But firstly, what do we define as DEEP?

The threshold for what’s considered a deep dive varies considerably from jurisdiction to jurisdiction— and sometimes from unit to unit within the same jurisdiction – and because of this, any real definition is a moving target. Your team’s SOP should be the guiding light; however, for the sake of illustration here, we will draw a line at 18 metres/60 feet. Anything deeper than that is deep, and requires special handling.

The first item on any deep-diving agenda is gas supply: specifically, gas volume management. The deeper we go, the greater volume of gas we use with each breath. Also, Diver A may have a dramatically different consumption rate than Diver B.
Here are some numbers. My resting gas consumption rate (required minute volume or RMV), sitting here in my office typing, is a little less than average (about 12 litres per minute). Average is said to be about 15 litres per minute. This is based loosely on an adult lung size of about 6 litres, a resting tidal volume of about 1.5 litres and 10 relaxed breaths a minute. (For imperial units, the average commonly used is about 0.5 cubic feet per minute.)

It is important to note that this is an approximation, an average, and will be greatly influenced by several factors:

Note well that last bullet point because, when last I checked, PSD often have to work under great stress. It does not matter how many times a diver has worked a crime scene or searched for something or someone who has dropped out of a boat, their level of anxiety is higher than it is driving into work in the morning.

The increased gas volume needed for a specific depth is lineal and requires only simple math. A dive to 30 metres/100 feet will require at least four times the gas required on the surface. A dive to 40 metres (about 130 feet) will require five times the volume or at least 25 percent more than at 30 metres or 100 feet!

Of course, scuba cylinders are fitted with submersible pressure gauges and several personal dive computers available to PSD teams give their users an accurate readout of tank pressure; however, PLANNING to complete a dive operation within the limits of the diver’s “on-board” gas volume is a smart first step.

One seat-of-the-pants option for this type of planning is to take the average resting rate, multiply it by the target depth for the job on hand, and multiply that number by a factor of at least two to correct for stress and workload (the actual Dive Factor). Here’s a simple example. A diver with an average consumption rate has to work on a vehicle recovery at a depth of 33 metres or about 110 feet. The ambient pressure at depth is therefore going to be 4.3 bar / ata. His per minute requirements will be his average rate of 15 litres, multiplied by the depth of 4.3, multiplied by a dive factor of three, rather than the minimum of two, because this is going to be hard work. Result = about 195 litres per minute. For those using imperial units, the steps are similar. Plug in 0.5 cubic feet X 4.3 X 3 = 6.45 cubic feet per minute.

Clearly, a single “aluminum 80” is not going to offer much time at depth, and certainly little margin for contingency, should the diver get himself tangled in the rigging for the lift or have trouble sorting out the correct orientation for the harness… which of course would never happen!

And this brings up the number one reason why the guidebook on deep PSD operations often specifies the requirement for a large volume cylinder, fully charged and containing at least 2800 litres, or about 100 cubic feet, when work is going to be carried out between 18 – 40 metres (60 – 130 feet).

Next on the list is a back-up source of breathing gas. For a PS diver, the term diving alone is a misnomer, since a diver is part of a working team. But since most operations are completed by one diver in the water at a time, we use the term alone. This is particularly relevant when a working diver’s primary gas source is compromised in some way. It might be a regulator free-flow – alarmingly common in cold or dirty water – it may be an o-ring failure, but there is no “buddy” to fall back on and ask for an alternative gas source.

At depth – particularly below the deep threshold of 18 metres, or 60 feet, many teams opt to outfit their divers with a back-up first and second stage fixed to a meaningful volume of alternative “air.” This redundant life-support system may take the shape of a “buddy bottle” – a side-mounted or slung stage bottle – or it may be that the diver is wearing a set of doubles with an isolation manifold. The bottom line should be an alternative system containing sufficient gas to get a diver to the surface at a rate no greater than 9 metres/ 30 feet per minute, plus a five minute safety stop!

The next consideration for deep diving is narcosis. Narcosis is variable and several factors seem to add to its ability to close down situational awareness and critical decision making. In the absence of SOPs that allow the use of helium as a working gas at depth (perhaps the topic for a future article), there are several factors that we can limit or virtually eliminate and thereby better manage narcosis.

Carbon dioxide is thought to have a dramatic effect on narcotic loading. When we work at depth, we consume more oxygen and produce a correspondingly greater volume of carbon dioxide. This triggers an increase in our breathing rate… and so has a cyclic effect: the more gas we demand from our regulator the harder we work at breathing, the more CO2 we produce!

A diver used to working at depth will recognize the early symptoms of carbon dioxide build up (rapid breathing for example) and moderate the workload until he regains control of this breathing cycle. But we can help allay the early onset of CO2 build-up by selecting top-quality regulators (those designed to be used deep), and by insisting that all regulators to be used on deep missions are serviced at a GREATER FREQUENCY than recommended by the manufacturer… and by a licensed and certified technician.

In addition to using more gas, when a diver ventures deeper, the limit to the number of minutes he can spend there without requiring staged decompression stops to get back to the surface is shortened. Not only does staged decompression demand specialized training (and is sometimes forbidden by PSD SOPs), it also requires additional gases to help optimize the off-gassing process as the diver makes his slow ascent. The special techniques, training and equipment for staged decompression diving is well outside the scope of this article, but there is one item from the stage decompression arena that a PSD working deep should carry with them: a good personal dive computer (PDC).

The models available today (so-called fourth generation PDCs) are a boon to PSD since they are downloadable (offering a decent audit trail for tracking and logging missions), programmable (allowing the use of different gases AND the setting of decompression tracking to be at conservative levels), reliable deco management tools (they do not lock the diver out should the NDL be exceeded), and highly visible (new screen technology means critical information is available at a glance).

In murky water, dive lights are often more of a nuisance than a help, but at greater depths, even in relatively clear water, a good dive light is a required tool. During the past few years, the technology behind dive lights has undergone a similar revolution to PDCs. Gone is the need to carry an expensive canister light, as there are now handheld models that offer burn times in excess of three hours on one charge and as many as 1200 lumens of light. Some of these lights are small enough to fit into a tool pouch and carry a price-tag that will keep most accountants happy. When diving deep, the usual procedure is to carry a strong primary light and at least one backup. This has never been easier to conform to.

The last items on the list for deep PS diving is thermal protection and personal comfort. As with contaminated water diving, most deep operations are carried out in drysuits and thermal underwear. These pieces of kit are particularly important when water temperatures are moderate and several dives may be required to get a job completed. Hyperthermia is dangerous, and anything approaching it has the potential to cause serious problems. Not only are drysuits warmer at depth, but during surface operations and surface intervals a drysuit significantly helps keep divers comfy.

And while on that topic, let’s talk hydration and the pee factor. If we are going to spend an hour or more zipped into a suit, an off-board dump (a pee-valve) can greatly increase a diver’s comfort. If we borrow from the technical dive community, off-board dumps are commonly used by male and female divers and can help to keep a working diver’s mind focused on the job at hand and not the “Johnny on the spot” back in the parking lot.

Dive safe and thank you for your service.

What is an Acceptable Depth for a Public Safety Diver?