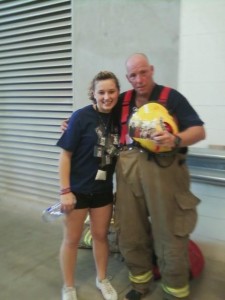 Buck Buchanan from Georgia recently attended FDIC and worked the ERDI booth during the event March 24th through the 27th at the Indianapolis Convention Center. Also in attendance at the FDIC show on behalf of ERDI was Regional Manager Shawn Harrison and BOD Representative Nestor Palmero.

The activity at the ERDI booth continues to grow exponentially every year, but this year it was different. There was one topic that was on every ones lips if they were involved in purchasing and procurement…budgets!

It’s no secret that many municipalities and their staffs have been impacted by the home value roll backs and therefore the short fall of tax dollars. One thing that was an over the top hit for ERDI was the growing numbers of online courses that help fulfill the academic requirements without requiring additional OT requirements.

This year’s FDIC had a very unique element for ERDI, on Friday Morning Buck Buchanan entered the booth and stated, “I’ll be back in a bit, there is something I have to do”. As he walked away we wondered where is he going with that Scott Pack?

Upon his return here is what Buck had to say….

“I found out about the 110 story climb as a memorial to our 343 fallen firefighters/brothers that gave their lives on 911 and decided to honor their memory and the memory of a particular man. Each of us making the climb carried the picture of a fallen firefighter. I had the opportunity to meet some of his family members and thank them for their courage and that of their firefighter. I climbed those 110 stories’ in full turnout gear with a Scott Pack because that’s what they did that day in September 2001.

I was lucky to meet a thirteen year old girl who was attempting the climb for her father a firefighter and as is so often the case, you never know how what you do will effect others, this was a hard climb to the top tier of the Lucas Oil Stadium and as the motto said ‘we climb because they climbed‘ after the two hour climb this old PSD… who sometimes wonders if people really care, was approached by this sweet young angel and she asked if I would take a picture with her because she viewed me as an inspiration during the climb. She said “you never stopped, you never quit, you just kept going and I thought if you could do it with all that gear I could do it too” I told her I had girls at home about her age and showed her the picture of my wife and girls and reminded her on 911 our brothers did not stop … and then it hit me!

OUR brothers… those 343 brave souls climbed that day for the same reason I climbed 9 years later… our wives, kids, community and the brother next to you.

As it turned out that little girl, who was there one minute and gone in a flash will never know that she was the true inspiration on that day! Her kind words and bright spirit let me know people do care and my brothers, those 343 firefighters may have fallen but they will never be forgotten.”

From training to operations: ERDI team show their skills