This site will not function as intended with JavaScript disabled!
Blog - Latest News
You are here: Home / Members Newsletter / SDI/TDI Is Making a Difference, One Dive at a Time in the Philippines on... 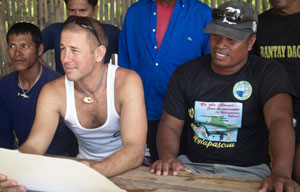 If you were to ask Matt Reed, SDI TDI Instructor Trainer, or David Joyce, SDI TDI Instructor of Evolution Diving, what they were going to do on a precious day off, one would expect to hear “go diving of course!” seeing that Malapascua Island, which is located on the northern most tip of Cebu in the Visayan Sea, is known for its Thresher sharks and mantas. Instead, you’ll find David and Matt assisting the Bantay Dagat in the collection of Crown of Thorns (COT) starfish off of local reefs. The Bantay Dagat, loosely translated as “Sea Watch” is a marine preservation organization that not only works to preserve the reefs, but also acts as a deterrent to illegal fishing tactics.

In the fall of 2011, David and Matt realized that the recent population explosion of Crown of Thorns Starfish was having a devastating effect on the reefs. Acanthaster Planci —for the scientific types— COT is one of the largest seastars in the world. It also is a predator that feeds on coral polyps. Known for its long spines along its arms, along with its shape, it has only a handful of natural predators and once on a reef, the results can be horrific. A single COT, depending on the season and location, can consume and kill 6 M²/65 Ft² of coral.

What started as a small project at Evolution Diving entailing a few spare hours here and there has evolved into organizing other resorts in the area, as well as working with the local population and the Bantay Dagat to remove COT. “In the early phases, we were collecting and removing about 200 COT per dive hour per diver” stated Joyce. He added that with the cooperation of local fishermen, dive shops and Bangay Dagat, that collection and removal topped 140,000 COT’s. Now, Crown of Thorns are at what is considered normal levels, however they are not done yet. As Matt said, “We really are stewards of the oceans and as such, bear a responsibility to act accordingly”. Reed and Joyce went on to say that included founding the Malapascua Marine Protection Fund. Evolution, along with 3 other dive resorts, promotes environmental awareness and asks divers who are diving Monad Shoal, where the Thresher Sharks are frequently seen, to donate 50 Philippine Pesos, about $1.18 or less then 1 Euro to the fund. To date, Joyce stated that, “not one diver has refused a donation.”

Continuing their efforts, they now donate management time, staff and boats to the Bantay Dagat for environmental efforts to combat illegal fishing and the fund pays local staff for their efforts.

“Divers come to Malapascua to see the coral reefs, enjoy underwater photography, dive with sharks and for the technical diving as well” David went on to say. “It’s important that we continue our stewardship. As a result, our guests are able to enjoy deep diving, underwater video or most any underwater activity they choose.”

By the way, wondering what happened to those 140,000 Crown of Thorns seastars? Evolution Diving and the Bantay Dagat are experimenting in using them to develop fertilizer for the local population.

To learn more about these efforts or about diving in the Philippines, including trimix, sidemount diving or shark diving, contact Evolution Diving at info@evolution.com.ph. To learn more about SDI TDI programs, visit https://www.tdisdi.com.

Summer Specials, Get ‘Em While They’re Hot!
Scroll to top