This site will not function as intended with JavaScript disabled!
Blog - Latest News
You are here: Home / Members Newsletter / TDI AT NACD CONFERENCE… 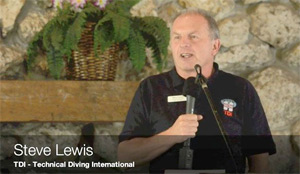 Back to the roots of technical diving, but the vista is changing

At various times, many of those of us who work and play in the technical diving arena are reminded that much of the equipment, dive protocols and training procedures common in technical diving have their origins in Cave Diving. It figures, then, that when TDI gets an invite to attend a “cave diving community function,” it pulls out all the stops and makes the effort to put in an appearance.

This year’s NACDi Conference was held in North Florida’s “cave country.” It started on Friday, November 11 and wrapped up on Sunday afternoon, November 13. The conference theme for 2011 was “Sacred Rivers.” One of the featured presentations during Saturday’s round of seminars was about an NACD supported project exploring the Sistema Sin Nombre Cave in Cozumel, Mexico.

As in past years, the conference kicked off with a social and chili cook-off on Friday (live music and “enlivened” taste-buds aplenty), and after Saturday’s packed line-up of displays and presentations in the Legion Hall in Live Oak, the conference concluded with the Annual Rebreather Summit on Sunday. And as in past years, every aspect of the event highlighted the strong sense of community that exists in the “North Florida Cave Crowd” – a crowd that features members from Europe, Canada, the Caribbean, Mexico, South Africa, as well as most states in the Union.

However, the real focus for TDI was our participation at the 5th Annual Rebreather Summit on Sunday. The summit format varies slightly from year-to-year and the emphasis for 2011 was on standards and training issues. These issues were front and center with the audience because of two community concerns that surfaced during the day-long summit.

Several audience members were asking for opinions on – or explanations of – the new agency guidelines for sport diving certifications on rebreathers. At issue was the seemingly short duration of the classes, with one instance being a three-day program to certify on the sport diving version of a popular “mainstream” CCR, and the propriety of marketing rebreathers enmasse to the sport diving members of the recreational diving community.

The consensus from the manufacturers seemed to be that simplified unit design coupled with courses where the emphasis was on actual in-water training – the academics having already been completed through onLine learning – and spending three days drilling skills, will result in divers who will be fully able to operate their units. A strong warning was that the standards for diver exposure at this level (essentially the same as TDI’s air diluent no-deco sport classes for the Poseidon Discovery sport CCR launched more than one year ago), should be closely monitored/enforced, and depth and time limits should never be exceeded.

Perhaps more fitting for the occasion, and certainly drawing more reaction from everyone present, were questions that related to diving rebreathers in a cave environment… the opposite end of the spectrum as it were to sport divers and CCRs!

Questions fell into two categories: one asking opinions about the need for divers who already have open-circuit cave experience to “re-certify” for CCR cave diving, and the second asking about the development of specific CCR cave classes for divers who are not interested in “working up” to CCR cave diving by taking an OC cave class. Specifically on this last topic was the suggestion that some divers migrated to CCR almost immediately following open water certification and have zero desire to dive on open circuit at all.

“With the current focus on sport diving CCR training, surely this is a situation that the agencies will be faced with more and more often.”

The two agencies represented on the panel (NACD and TDI), had similar answers for question one. A stand-alone CCR cave course for divers with experience in caves with OC is a tough sell, but at the very least a one or two day CCR orientation should be the norm.

“Probably far better to err on the cautious side since a CCR can put a diver a long way back in a cave… in many cases, much farther from the entrance than that diver could have easily got to on open-circuit without serious gas staging,” said Larry Green. “That is a sure recipe for disaster as soon as something goes wrong with the unit… even a small glitch that would be insignificant in open water,” he added.

Green, who is the training director for NACD and a member of TDI’s training advisory panel, added that although many of the skills that are required for open-circuit cave diving are identical for CCR cave, there are several issues that are unique to CCR.

Steve Lewis elaborated by saying: “Typically, OC cave divers have a pretty simple set of rules to govern how much gas they need to carry with them. For CCR divers, those rules are not as simple because there is an extra variable, and that variable is the diver’s gas consumption rate once he has bailed out; it will vary a lot!”

Some further clarification regarding CCR Cave training was offered by Ben Reymenants. Ben is a senior TDI instructor-trainer based in Thailand, and he has been one of the main contributors to the development of TDI’s CCR Cave Program.

He pointed out that in a worse-case scenario – carbon dioxide poisoning – a diver, even an experienced one, might easily be hyperventilating and close to panic.

“The question then,” he suggested, “is what consumption rate is best to use as a benchmark for gas planning?”

Typically a SAC rate of 14 litres per minute is a good starting point. (That’s about half a cubic foot for those struggling with imperial units). To find the actual consumption (RMV), that number would be multiplied by the depth or average depth expressed in bar and the product of that calculation by a number to represent the Dive Factor (workload, thermal stress, etc.). For most OC dives, a DF of 1.5 to 2 is OK. However, for a CCR diver battling back from the edge of CO2 oblivion, a DF of 3 is the minimum recommended stating point.

To put this into a real world example, consider a CCR diver bailing out around a 40 minute swim from the mouth of a cave with an average depth of 25 metres.

That is a lot of gas, and effectively requires the diver to carry more than two fully-charged 12 litre cylinders (aluminum 80s) as bailout. Is this realistic? Is it realistic to imagine that the elevated consumption rate experienced immediately following CO2 breakthrough would persist for the full duration of the exit swim?

Reymenants suggested that a small but critical topic to cover as part of a CCR cave class was these questions.

Also, he asked, is it wise for the diver to have no redundancy in the event of one of those two bailout regulators malfunctioning?

By the time the panel discussion wrapped up at around 4 o’clock, the audience seemed happy with the answers the panel had offered, and the summit closed up for another year.

For those interested in gaining additional insight into CCR training and standards development, please see your local TDI facility or independent CCR instructor. Also, make a date to attend Rebreather Forum Three in Orlando next May.

We know that most of you won’t want to wait till May of 2012 to learn more, so visit https://www.tdisdi.com today to get started!