This site will not function as intended with JavaScript disabled!
Blog - Latest News
You are here: Home / Newsletters / Wreck Diving is Calling 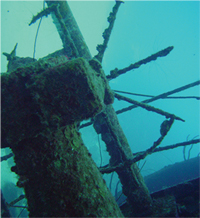 What is the lure of a wreck that will cause some men to invest their lives pursuing them?

Mel Fisher’s name to this day is remembered as one of the world’s most recognized Treasure Hunters, though deceased sometime ago. While dreams of sunken treasure may be a lure for many-a-diver set out to become a wreck diver, there are many reasons divers follow the Sirens to explore wrecks of all sizes, shapes and depths.

Regardless of your level of experience, wreck diving can be done safely as long as you get the right training, use some common sense and follow some established rules.

It is common when speaking about wreck diving  to hear the question asked…”Basic or Tech”?

Let’s take a look at what separates the two.

As a general rule, a basic wreck dive would consist of swimming around the outside of the wreck with the occasional peak in the wheelhouse or cargo hold. That does not mean there is not a lot to learn or see on the outside. For divers wishing to survey the wreck or watch the marine life it attracts, this is the perfect spot. The outside of a wreck is also where we get those dramatic photographs of the bow stabbing towards the surface hoping to sail again. For the diver wishing to view a piece of history, diving on the wreck can show you what some will only read about or see in photographs. This type of wreck diving has been enjoyed by many, and, for some divers, this is as close as they want to get to a wreck.

The SDI Wreck Diver Course allows one to ease into the adventure. The program can be completed at two different levels, Non-Penetration (2 dives) or Limited Penetration (3 dives). Participants can get started as early as the age of 10 (15 for limited penetration) after successfully completing their Basic SCUBA certification requirement. The gear required is simply basic SCUBA equipment with the addition of a reel. With the correct experience, the activity can be enjoyed to a maximum of 130 feet of depth, applicable to current certification. In the basic or SDI level, the diver is restricted to swimming outside the wreck. For Limited Penetration, only after proper training and preparation, the diver is limited to a “swim through” or “staying within the ambient light of entry point” and of course straightforward dive planning and skills are required in ALL instances!

Advanced wreck diving is really an extension of basic wreck diving. Advanced wreck diving starts on the outside with a survey that familiarizes the diver with how the wreck is oriented: on its keel, on its side, separated into halves or with a twist. No two wrecks are ever the same and all suffer different damages due to how they sunk, how long their journey was to the bottom or the severity of the storms that have battered them over the years. This is an extremely important part of any wreck course- the visual image- because it is the only thing the diver will have to rely on since their compass will not work. Even wooden wrecks tend to have massive hunks of metal(boilers) which send the compass into a spin. This is the point where advanced wreck diving waves goodbye to basic wreck diving, and we go beyond “the light zone.”

The light zone is where ambient light enters an overhead area, and artificial light is not required in order to see. Once a diver enters an area in a wreck where a light is required, the rules of wreck diving change. A diver in this area must have the knowledge and skills to go into and come out of a wreck should the worse possible scenario happen, such as a complete silt out. In order to do this, divers must know how to use a reel for navigation and how to properly tie off lines so they will not get cut during the dive. But this is also where the fun starts for a wreck diver who is craving more intimate details of the wreck.

Often, wreck divers are driven to further their skills by the sheer need for knowledge. There is so much to learn about any wreck; every room has  unique history. Be it a berth or an engine room, there is a story waiting to be told. With the appropriate training, upon entering a vessel and stepping into the galley or the wheelhouse, your imagination will flood with thoughts as to what was happening in that room, minutes before it sank. There are also those that want to see the artifacts, some still lying in place as if the ship had never sunk. To some, the best part of the wreck dive started before they even entered the water; instead, it was the hours of researching and planning that lead up to the dive, but before a wreck diver can see these sights, they need to undergo serious training and have an experienced wreck instructor explain the safety protocols.

Remember that worst case scenario of silting out? For divers who spend their time on the outside of a wreck, this silt would only come from the fin thrust as it hits the bottom or deck of the boat. For divers entering the wreck, this silt comes from above and is called percolation silt caused by the exhaled bubbles as they dislodge rust, insulation or other debris trapped on the ceiling of the wreck.

Advanced dive planning and skills such as:

Wrecks have a mysterious calling to many people. Wrecks that occurred due to war or sank because of a violent storm draw divers in; some say this is because it closes that chapter in our lives. Others would go there because they read about it in history books, and they want to see it firsthand. Whatever the reason, or if you are going to view the wreck from the outside or inside, it is always best to take a course from an instructor who has been there and done it. Sometimes the best lesson learned from a course is not what is in the book or the skills you had to perform, it is merely what you learned by diving with and watching how an experienced instructor handled themselves underwater.

Every wreck holds a secret and has a story, even the ones that were sunk intentionally. Do yourself a favor:plunge into that story as it is sure to be rewarding and exciting in so many ways!

You’ve always wanted to do it, so why not get started right now? Visit https://www.tdisdi.com to find a wreck diving course in your area that is right for you…who knows where your wreck diving adventures will take you!


Find a training facility near you.

Rigging Stage Bottles… How to carry extra scuba tanks… and why.