Things that sting…and how to avoid them!

You are here: Home1 / Things that sting…and how to avoid them!

Things that sting…and how to avoid them!

Here be Dragons warned medieval maps, as land gave way to uncharted oceans and their mysterious inhabitants. Well, as it turns out there are dragons in the seas, but they are small and loveable (Phyllopteryx taeniolatus). No threat at all! There are however creatures who can give divers, snorkelers, swimmers, and surfers painful and, at times, fatal stings. Here are some of them to look out for…but remember, these animals are only defending themselves or trying to catch their dinner! 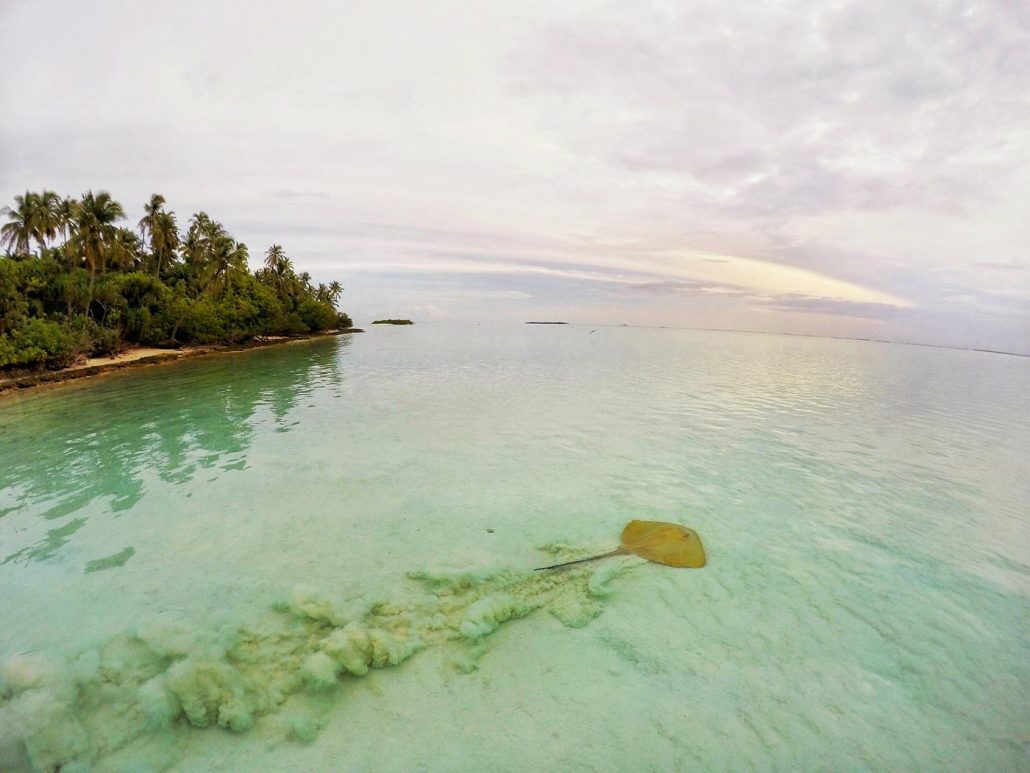 The death of Australian naturalist Steve Irwin from a stingray made international headlines in 2006. Yet it was only the second recorded stingray-induced death in Australian waters since 1945. Stingrays are not naturally aggressive but like any animal will react if frightened. Often hiding in sand to await prey, the ‘stingray shuffle’ (sliding your feet along the sand rather than stepping down hard) can alert the animals to your presence and allow them to take avoiding action.

Stingrays are common in coastal tropical and subtropical marine waters throughout the world. Some species live in the deep ocean, and there are also river stingrays. They have a venomous barb on the end of their tail which they use for defense

Stingray injuries are rarely fatal. In Steve Irwin’s infamous case, the stinger penetrated his chest cavity causing massive trauma. Nonetheless, stings are serious. They can cause pain, bleeding, nausea, weakness, and fainting. Embedded spines are best left to medical professionals to remove. This is in case the barb breaks off in the wound, which may lead to infection.

First aid includes cleaning the wound and immersing the injury in hot (40° C/104° F) water if possible for at least 30 minutes. Remember: Always seek medical attention for a stingray sting.

This small fish which rests in sandy shallows near the shore punches, literally, above its weight! Its toxic dorsal spines produce acute pain if stepped on. Other symptoms are nausea, headache, and even abdominal cramps. Death is extremely rare.

As with other such injuries don’t remove embedded spines with bare hands. Always wear gloves or use tweezers! To reduce pain, immerse the foot in hot water (as above with stingray injuries). These small but potent fish live in the coastal waters of the Atlantic, North Sea, and the Mediterranean. 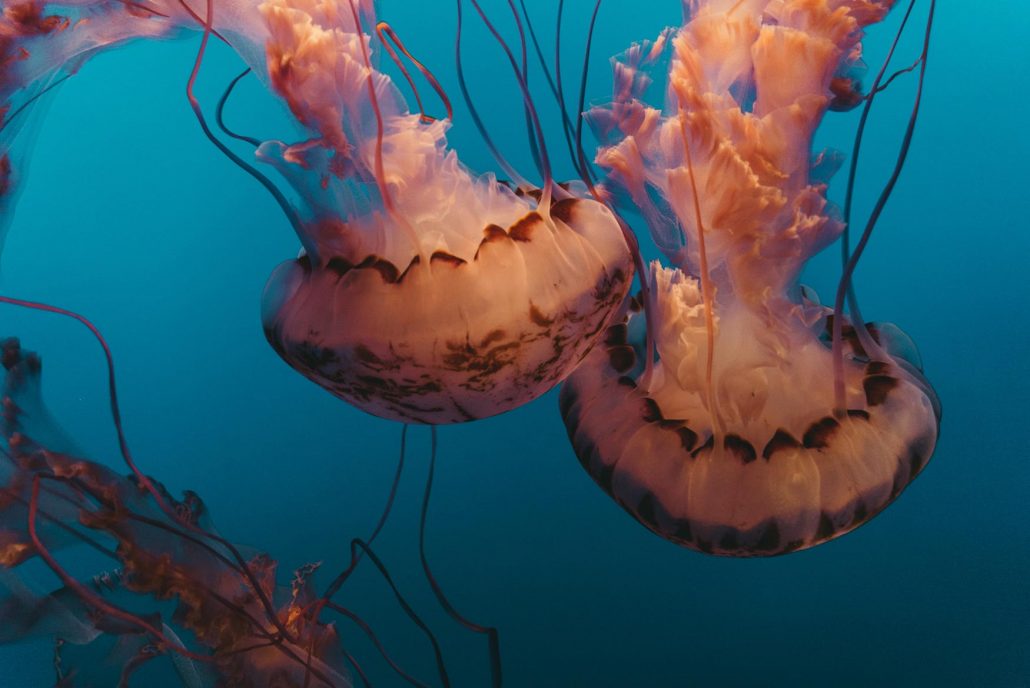 These sea creatures have tentacles covered with individual stingers called nematocysts. Jellyfish generally fire their darts into prey, but swimmers, divers, and snorkelers can be stung by physical contact. Swarms of jellyfish can also wash up on beaches.

So long as the stinger in the animals is still hydrated it can fire off into unsuspecting beachcombers who touch the animals. Always remove any tentacles using gloves or tweezers and, to reduce pain, immerse the affected area in hot water.

Most stings from jellyfish cause rashes and/or blisters. More acute reactions can be headaches or even chest pain. But stings from the Australian Box jellyfish and the Portuguese Man-of-War can be fatal. These need immediate emergency medical attention.

Be prepared to perform CPR in case of respiratory failure. Sea Wasp stings may prove fatal in as little as three minutes. To be safe, do your research before diving: avoid known Box Jellyfish habitats and minimize the amount of uncovered skin. 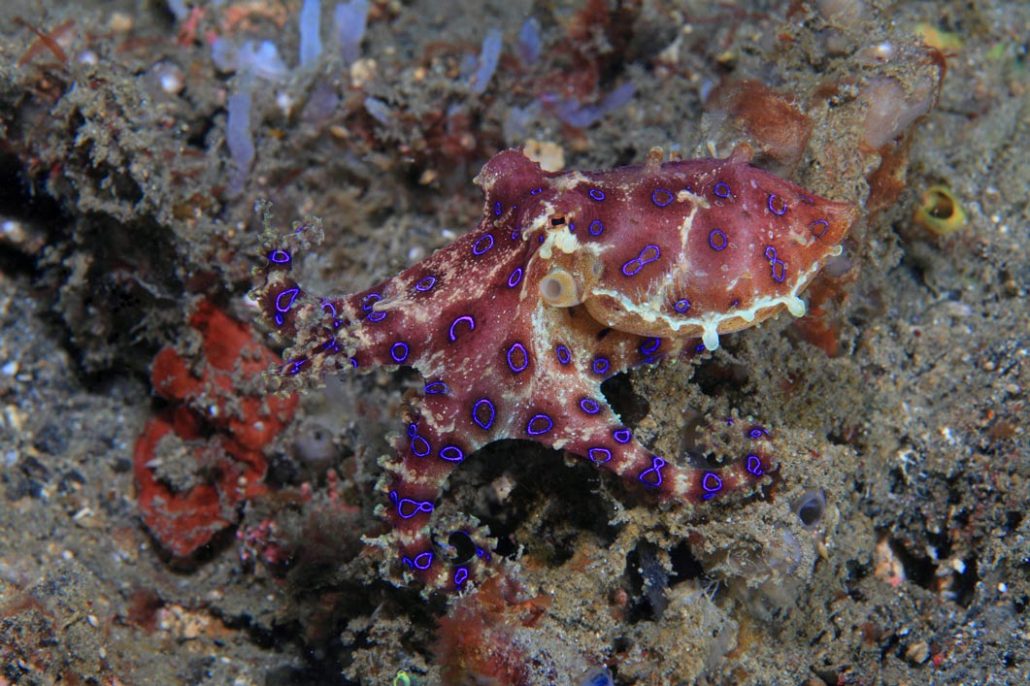 This small (12-20 cm/5-8 in) shy little octopus with its distinctive blue rings has enough venom to paralyze ten adult humans according to a University of Sydney study. Found in tide pools and coral reefs in the Pacific and Indian Oceans, it spends much of its time hiding in small crevices or abandoned shells.

If threatened, its bite is tiny and relatively painless. The venom however can cause tingling of the lips and tongue, followed by difficulty swallowing, dizziness, and headache. This can progress to paralysis and eventual respiratory distress or failure. The victim is aware something is wrong but can do nothing.

If bitten by a Blue-ringed octopus always seek medical attention. First aid is pressure on the wound (‘pressure immobilization technique’) and artificial respiration (CPR) if there are signs of respiratory failure. Hospital treatment consists of putting the victim on a medical ventilator until the patient’s own system can metabolize and secrete the venom. Luckily there are few reported deaths. With timely medical help, full recovery is the norm.

There are about 600 species of cone snail. They can be found in the Indian and Pacific Oceans, the Caribbean and the Red Sea. They live in reefs hiding themselves partially under sandy sediments. They often have beautifully patterned shells, very attractive to collectors.

All cone snails are poisonous to some degree. It is only the larger ones, up to 23 cm/9 in long, which we need to worry about. Every snail has a venom-injecting ‘tooth’; someone picks up a cone snail it responds by ‘biting’ the offender with its harpoon-like tooth.

In the case of the larger snails this tooth can sometimes penetrate gloves or wetsuits. This ‘bite’ can cause mild to moderate pain. In more serious instances numbness, blurred visions and paralysis can occur. Paralysis can sometimes lead to respiratory failure. Symptoms can appear immediately or may take a few days.

Always seek medical attention in case of a cone snail sting. First aid measures can include application of heat (such as soaking the affected area in hot water) for pain relief. Also use of the ‘pressure immobilization technique’ can help slow progression of the toxin. Watch out for symptoms appearing in succeeding days.

These marine creatures are not generally aggressive but will react if frightened, so some general rules:

This technique was developed in the 1970s by an Australian medical researcher, Struan Sutherland. It was originally designed to be used on certain snake and spider bite injuries. Its purpose is to contain the spread of venom from the affected area, and prevent the venom circulating to reach the vital organs.

It is not suitable for all bites/stings whether for snakes, spiders or other creatures. It is recommended for blue-ringed octopus bites and cone snail stings. Check DAN or another reputable site to refresh your memory if diving in waters where you are likely to meet these creatures.

The procedure is generally to:

These are a few of the problems you may encounter while diving, snorkeling, or other water-based activities. It is important to always keep your First Aid knowledge up to date, and to carry basic First Aid equipment whenever you dive. Remember, the oceans are a marvelous place full of amazing and unique creatures. Respect them, and your visits to their world will be a delight and not a disaster. 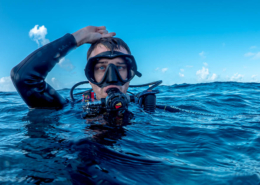 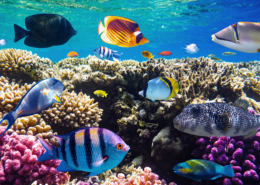 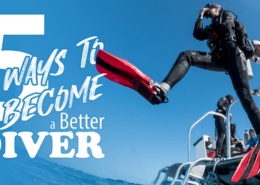 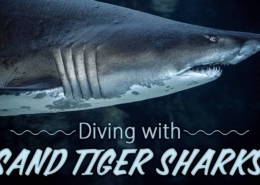 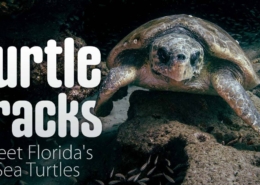 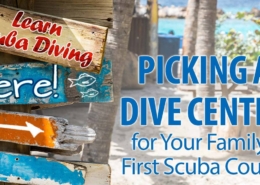 How Mesopotamia, Ping Pong and Losses Shape the Business of Scuba