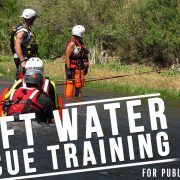 What one team thought would be a typical day on the water training turns out to be a lesson to all on general water safety. Swift water training is a critical skill for public safety dive teams, you never know when you’ll need it but you’ll always be happy you have it.

Thinking about becoming an Public Safety Diver? Wondering what exactly it entails? What type of training might be required before training starts? We’re talking about what public safety dive training is like from both sides. 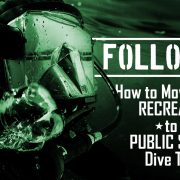 In this follow up article Tanya Chapman discusses what it takes to take a police unit from recreational divers to highly trained public safety divers. Also how we’ve progressed over the years in public safety diving with ERDI.

Some don’t realize the amount of training it takes to become an ERDI diver in the public safety field. These divers go through hours and hours of training only to risk their lives to bring others to safety. What happens when a whole police unit needs to get up to speed in the public safety diving arena? How do they plan for it? How do they make sure everyone is up to speed?

We all know Public Safety Divers see some pretty gnarly things when they’re on the scene… But do you really stop to think about what YOU might see or hear during your training or how it will affect you? 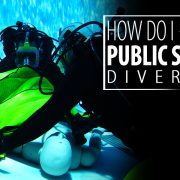 The primary question on every one of their minds is “How do I become a public safety instructor?” The answer to this question is both simple and complicated.

If you read this month’s SDI newsletter, you read all about sidemount diving taking a role in the recreational world. Once considered a skill of technical cave divers, sidemount diving has found a place with everyday divers. What role can it play in Public Safety Diving? This question is best answered by looking at the benefits of sidemount diving.

I will not disagree with some of the advantages noted above, but I want to compare those advantages to Public Safety Diving. The first point for comparison is in the ERDI curriculum which highlights standardization of equipment among teams and team members. In order to achieve a high level of efficiency a team must approach each unique operation using methods that are repeatable. This means using the same approach each time, starting from dispatch. As an ERDI instructor, I have had the opportunity to work with many PSD teams. I can tell you one trait of highly effective teams is preparation. Their equipment is always set up and ready to go. The gear is inspected regularly and is always returned in the same configuration. This sets an expectation among the team. If a team member has been away for three weeks, they can immediately respond to a call knowing the setup has not changed. This aids in response time and team member confidence in the operation and equipment. Standardization among team members and the equipment is essential.

Current methods of scuba instruction use back mounted cylinders, and with sidemount diving it is suggested that you have a minimum certification level of advanced scuba diver. Until this most basic training curriculum changes, I would not suggest sidemount diving for a PSD team. One might argue that if a team starts a training regimen involving only sidemount diving then members will now have it as an expectation. Many teams train and work with other local and regional PSD teams who may or may not use this method, but one thing is for sure, they learned back mount diving from the beginning. Keeping with the theme of standardization among teams and team members, we should choose the least common denominator. Pete Nawrocky of Dive Rite, talks about sidemount diving stating, “Hose routing is completely different than what is normally seen…” He continues on, “There are a variety of configurations regarding hose routing for the regulators second stage.” Sidemount setups should be customized to each individual diver, but this can lead to confusion among PSD team members using team equipment. PSD teams do not have the resources to provide each member with their own set of gear.

Another advantage is ergonomic configuration. This is certainly valuable to the recreational diver who dives with only their buddy, or even as an SDI certified solo diver. PSD teams respond with many resources and have roles dedicated to assisting the rescue diver with gear and transport to the dive site negating the ergonomic benefit for the PSD team member. Sidemount also highlights the advantage of carrying single cylinders vs heavy doubles, but PSD teams do not use doubles given the time limited profiles we use. The latest NFPA standards in structural firefighting require air bottles to alarm at 33% remaining time vs the 25% remaining previous standard. Similarly PSD teams will exchange divers well before the accepted recreational standards for remaining pressure. If you choose to use only a single sidemount tank, then you need to compensate with weighting.

PSD teams do require the use of an independent redundant air source as a backup in case of emergency and the ability to share this backup with another diver. One could make the argument that you are already slinging this backup cylinder as you would sidemount bottles, but this is usually a 19 or 30 cf pony bottle vs a full sized cylinder and as such, does not compare in size, usage or configuration. In sidemount diving, both cylinders are used for the primary diver; one is typically associated with the BCD and the other for the dry suit. Sidemount cylinders are also supposed to be used in a coordinated manner to maintain trim, adding the additional task of switching second stage regulators throughout the dive.

Many of the listed advantages of sidemount diving are beneficial for the recreational diver; PSD teams operate in such a way that these advantages are not applicable. In addition, we demonstrated how adopting a new configuration can add to inconsistency and a lack of standardization among teams and team members. This can lead to reduced response times, increased equipment problems due to lack of familiarization and difficulty working with mutual aid teams. A highly efficient PSD team will be consistent in training, equipment and practices so that each operation is routine, even though every operation is unique.

About the author: Philip DePalo is an active Public Safety Dive Instructor in Baltimore County working with the Bowleys Quarters Volunteer Fire Department Marine Emergency Team and the Middle River Volunteer Ambulance and Rescue Company Dive Team. If you have specific questions, please contact him at phil@philipdepalo.com