In my 25 years of working in the diving industry, I have had many doors open to make incredible dives with incredible teams and truly amazing people. But over the last 5 years these doors have started leading me more into the ﬁeld of Scientiﬁc Diving and more importantly, the opportunity to combine my background in Technical CCR diving with scientiﬁc diving projects.

One such opportunity arose from being sent to the island of Crete, part of Greece in the Mediterranean Sea, to train a five-man team of archeologists from the Greek Ephorate of Antiquities, and Woods Hole Oceanographic Institute, in assessing the feasibility of using CCR in their ongoing work. This course created the opportunity for me to return the following year with the team to the island of Antikythera (north of Western Crete, and south of Kythera and the Greek mainland) to survey and search the 30-plus kilometer circumference of the island for ancient wreckage and anchorage sites, and more importantly, to revisit the site of the famous Antikythera wreck.

By way of background, in the early 1900’s a group of Greek sponge divers found themselves sheltering from inclement weather under the cliffs of the east shore of Antikythera on their return from a sponge diving voyage. Like all ﬁshermen, opportunist to the last, they decided that while anchored in shelter they may as well dive and look for sponges in this unfamiliar site. The ﬁrst diver to descend the sloping sea bed at the cliff base to approximately 60 meters (on air!) in ‘Standard Dress’ (brass helmet, canvas suit, lead boots, and chest plate with air pumped in by hand from the surface) surfaced immediately stating that the sea bed was covered in bodies! The more experienced Chief Diver promptly descended to ﬁnd that Diver One was half correct… the sea bed was covered in bronze and marble human and animal sculptures. An ancient wreck site had been found!

Working with members of the Greek Ephorate of Antiquities, the sponge diving team lifted many of these sculptures and other artifacts from the site, dragging large rocks (believed to have fallen from the cliffs above during earthquakes) away from the site to recover items even further beneath. These artifacts were found to be Roman and became the heart of an exhibition of the wreck in Athens. One item recovered was thought to be of little import and was left as a corroding pile of conglomerate in a museum store until it was analyzed and worked on in the 1960’s when it was found to contain multiple metal toothed gears that became known as the Antikythera Mechanism.

The site remained at rest, undisturbed until Jacques-Yves Cousteau returned to survey it as part of his series of worldwide explorations aboard the RV Calypso in the 1970’s. Any avid fan of the Cousteau documentaries (who owns the complete boxed set) can watch the team’s exploits on the Antikythera site with Calypso (the submersible ‘ﬂying saucer’) and their water dredge, as they excavate the sea bed and recover many amphorae and other artifacts including a beautiful smaller marble sculpture.

There were tantalizing questions that still remained however: Where was the actual ship? What was the famous mechanism? Was it complete? Did parts of it remain underwater on the wreck site? And most important, were there other ‘mechanisms’ on the wreck? 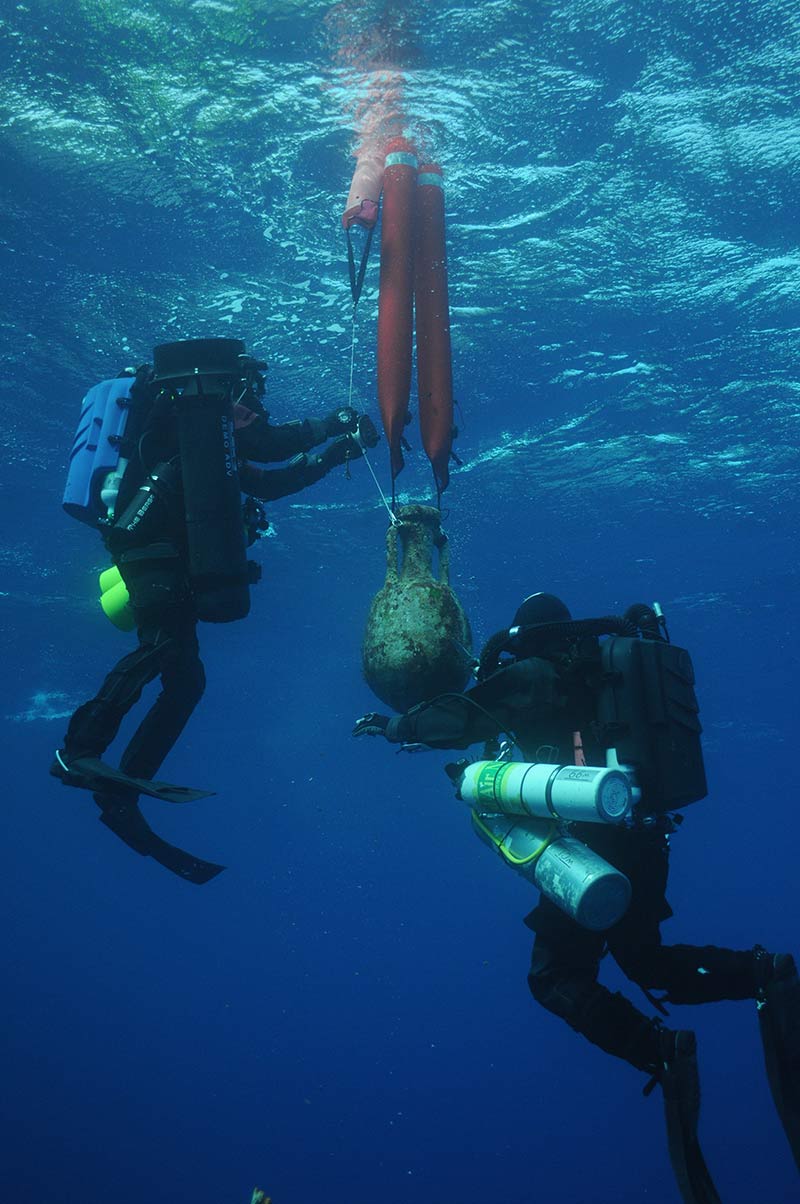 Our team went back in autumn 2012 and quickly relocated the site of the sponge divers’ and Cousteau’s discoveries. The site where Cousteau’s team dug was around a very large boulder at the base of the cliffs. Moving away from this, with the longer bottom times afforded by CCR, the clearer heads achieved with Trimix and the greater range given by state of the art DPV’s, we were able to locate a new untouched area of intact amphorae and within this area locate the large Roman two part ‘stock and collar’ anchor of the ship. After photographing, videoing, drawing and surveying the two parts in situ, the Ephorate granted permission for the team to recover the anchor. This ﬁrst required Alexander Soturio and I doing 45 minutes of hard physical work at depth to chisel and cut away the concretion that had fused the anchor parts into the sea bed over its more than 2000 years of resting there. This was followed by using straps and heavy duty lift bags to send the parts back to the surface. The larger stock part was so heavy that it could not be lifted on to our dive vessel but was made fast under its lift bags and tied to the stern cleats and towed back to the quay of the Antikythera harbor to be lifted by the harbor fork lift.

The ﬁnding of the anchor enabled us to add a few extra days to the following year’s (2013) project, on the western peninsulas of Crete, and to return to Antikythera for just two days with two tasks in mind. First, to run a CCR/DPV visual survey around the location of the recovered anchor to a distance that approximated the calculated size of the wreck based on the size of the anchor; and second, to run a high detail side scan of the wreck site and the area around it using state of the art ‘Edge Tech’ sonar equipment. This brief two day return proved highly worthwhile as the CCR dive team of Alexander Soturio and I managed to locate a second smaller two part anchor, a galley roof tile, and several intact amphorae within the proposed search site and within range of the recovered anchor. The side scan survey also proved highly successful locating several large isolated objects (about the size of small cars) off the site in deep water (150-160 meters) which was extremely exciting as we learned the ‘rocks’ that were dragged from the site in the 1900’s were actually large sculptures, including some of horses. 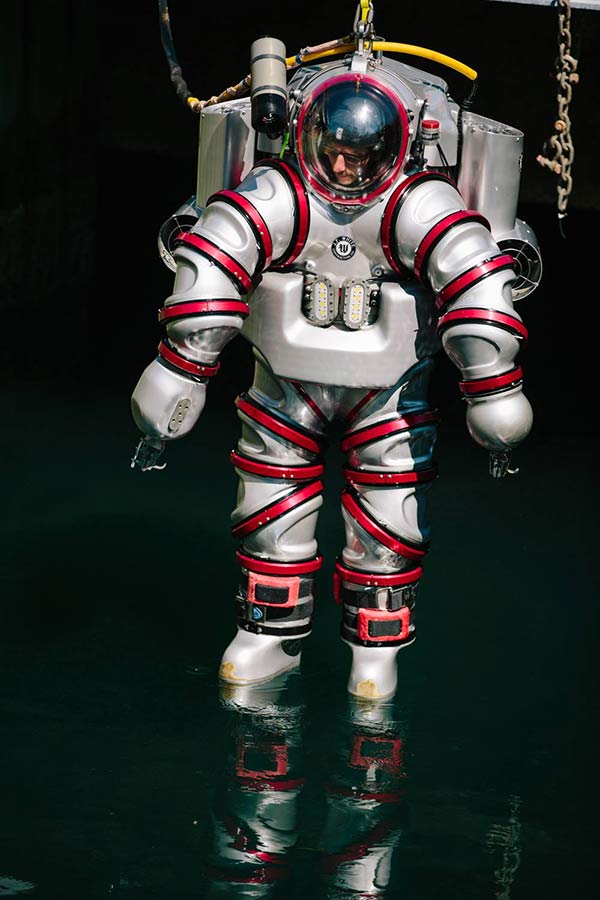 Having just returned from Woods Hole near Boston where I completed my Exosuit pilot training with three other team members, things are now getting really exciting for our return to Antikythera in September of this year. We plan to use the Exosuit (the latest manifestation of the 1 atmosphere diving suit) to locate, rig and lift the deep water objects and to also excavate and work the heavier tasks on the original wreck site.

More information about the Exosuit here.

Deep Diving is an Experience, Not Just a Number

TEKDiveUSA 2014, If You Missed It
Scroll to top