This site will not function as intended with JavaScript disabled!
Blog - Latest News
You are here: Home / TDI Blog / Playing darts with Dive Rite 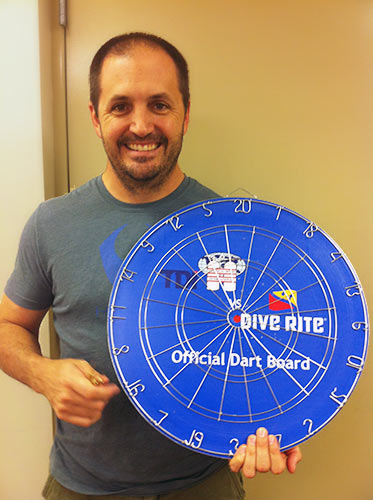 For one reason or another many of us learned to dive and ultimately made a career in the industry because of our passion for the sport. This passion is largely driven by the relationships we make along the way and incredible social interaction this sport fosters.

Based on the response we had to our last newsletter and a couple of stories we put out about things that have happened in the past, our marketing director asked me if I would write a story each month about something that happened in the past that shaped the history of the company. This next story is more of the recent past but is very indicative of how things happen in the industry.

It is no secret that manufactures and training agencies work together on a number of different projects due to the fact that when a new product is made, people have to learn how to use it. Well a few years ago I had the opportunity to work with Dive Rite on a couple of different projects. We found the two companies could work together on a number of different things that turned out to be very successful and fun to do. But as normally happens with people in the industry, things sometimes get a little competitive when you work together. So here goes. Over three years ago, TDI was approached by Dive Rite about working together to put on Tech Events. One of these events has happened the last two years at Buddy Dive in Bonaire, in the form of “Mission Tech Possible”. It is two one week events where people from all over the world come to either try Technical Diving for the first time, or do some deeper dives on Bonaire that are not normally done with the staff of the two companies. Needless to say participating and working in the event is a lot of fun. Basically we take people diving all day and then socialize at night with everyone.

Well many of you can already see where this is going. Upon the conclusion of the first event on the final night the staff, Lamar Hires, Lee Ann Hires, Pete Nawrocky (all with Dive Rite, and Flemming Elleboe (Chairman of SDI/TDI/ERDI), his entire family, and myself wanted to find someplace else to eat dinner that night and just relax. Well we found a restaurant that did not have anyone in it, was out of mint for mojitos, and looked really relaxed. After we had all had sufficient amount of food and a little to drink, it was brought to our attention that this establishment had a dart board. After a few games, and a few more drinks, our competitive juices started to flow. So it was decided, or more appropriately hustled, that Dive Rite and TDI would play for who had to pick up the bill for the night’s dinner and festivities. The catch was that Lamar (President of Dive Rite, Pete (National Sales manager of Dive Rite) would play against Flemming and I. Who better to pay the bill if we lost, we would only have ourselves to blame. What Dive Rite did not know at the time is I had played a little bit of darts in college so I felt confident that we would be ok. Well we did, and Dive Rite got stuck with the bill. The story doesn’t end there though.

Fast forward one year, same group of people, same event, and same restaurant at the end of the trip with a dart board. Once again we ate dinner had a few drinks and got out of our seats to play for the tab again. This time though Lamar played similar to how he played last year, but Pete was flat out awesome. TDI had to pick up this tab and it was considerably more than last year. After we lost Lamar, Pete, and Jared Hires were laughing at us. It turns out that the three of them had been plotting this for over a year. When they got back the previous year they went out and bought a dart board, and practiced as much as they could, just to get the opportunity to pay us back. In addition to that, we later found out Pete specifically had not been drinking at all so he could be sharp for the game. So they did get us back, but this story still is not over.

Christmas time this year a package arrives on my desk from Jared, with a note on it that says only one word “Practice”, it was our new dart board.

This is just another example of how this industry is just a great place to work and make friends for life. I just hope Dive Rite is ready for the next match, because TDI will be ready. If you are interested in seeing the match and placing wager, join us this October as we do the event for the third year in a row. You will make many more friends you will laugh with for years to come. In addition, you can watch Dive Rite lose.

We are Hiring!
Scroll to top