This site will not function as intended with JavaScript disabled!
Blog - Latest News
Jste zde: Domů1 / Grain at the Bottom of the Sea 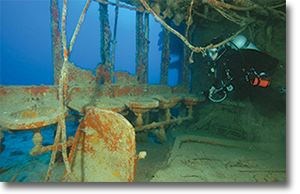 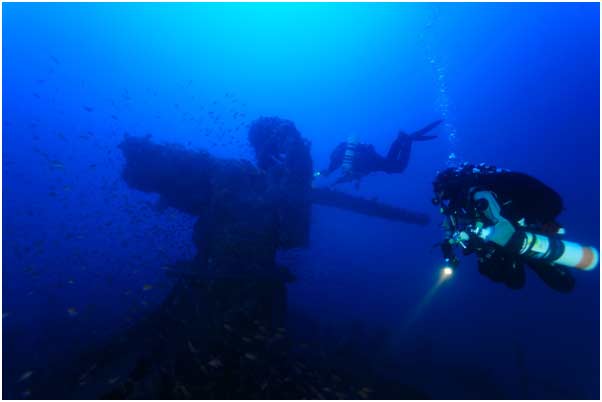 Many thanks to Maids, a beginner in scuba diving, who has not only managed to translate this account in to English, but who has also understood my struggle in the world of technical diving.

Attilio used to tell his friends: “She’s not interested in fish… she likes shipwrecks!” I was branded a tomboy.

I sincerely do like shipwrecks because they epitomize nature’s quiet but unrelenting take over of everything that contaminates it. They lie on the seafloor, oblivious to the dramatic event which has sunk them. They are sometimes a tangible confirmation of a real war or an other-world image in a documentary, their shape deformed by fire, by the explosion of a bomb or a torpedo. They are colonized by marine life which is unaware of the history of its dwelling place. My curiosity about shipwrecks, many of which lie below the 40 meter mark, led me to attend a “Decompression” course and subsequently “Normoxic Trimix”, both held by TDI. So, this is also the story of my wary approach to technical diving.

The simplest part was using bail-out tanks. Bi-tanks (10 + 10 liters), however, posed a more serious problem. Despite modifying the equipment configuration many times, I kept descending head first: even though I kept counterbalancing with fins and back muscles, I used to get out of breath and sometimes had narcosis symptoms. At last, a sympathetic soul on a diving forum suggested I shorten the crotch of my inflatable jacket and add a tail weight, thus eliminating my trim problem.

The Mediterranean basin was frequently a theatre for battles between the Italian Regia Marina (Navy) and the British Royal Navy during the Second World War.

Wrecks from that period can be found in the seas south of Sardinia and divers from all over Europe go there to investigate.

Many of them, like us, go to “Pro Dive Diving Center”, run by Susanna Sabbioni (SDI Nitrox Instructor) and Stefano Bianchelli (SDI/TDI Instructor Trainer, specializing in rebreather training), which can supply gases for tanks and a competent guide. That’s Stefano himself, who knows the area very well and whose technical ability is widely recognized. He’s got a bit of a crafty look but he’s really very helpful and good natured. 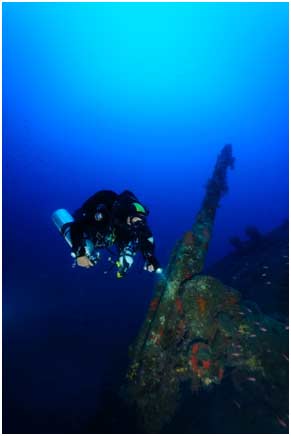 The dive center is situated in Villasimius, a small village renowned for its marvelous sandy beaches: Simius Beach and the adjacent Giunco Beach , where the salt marsh lagoon hosts colonies of pink flamingoes.

The Loredan (-54/65 m) and the Isonzo (-43/57 m) (Fig. 1 and 2), which were part of a convoy torpedoed on 10th April 1943 by a British submarine, were our first diving destinations. The most curious wreck, however, was, in my opinion, the armed cargo ship Salpi. It was torpedoed by a British submarine on 9th February 1942 in the waters around Cape Ferrato and lies at around -47 to 60 meters depth. We planned our dive for 22 minutes at 58 meters with Trimix 18/40 and decompression with EAN50 and EAN99.

We descended along the rope, which reaches the central part of the ship. A big cannon was sitting on the stern (Fig. 3) and it was possible to get into the various holds (Fig. 4). There was a well preserved explosives magazine in one of these and it was possible to make out the lines of bullets laid out tidily (Fig. 5), ready for use. Two big anchors were visible just in front of the magazine. 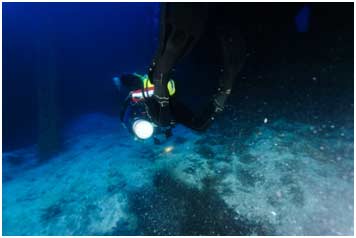 The most extraordinary thing was, however, the load of loose grain, which filled one of the holds. It was at least one meter high! (Fig. 6). It was just like grain one could buy at the market; one could sink one’s hands into it. It was covered with a 20 cm jelly-like layer, floating over the grain like a cloud; perhaps it was secreted by the grain itself.

Why hadn’t the grain been eaten by fish? Perhaps there aren’t omnivore fish at that depth, or perhaps metabolic fermentation processes are drastically slowed down. Unfortunately, a scientific explanation was not forthcoming, even though I asked marine biologists.

In another hold, a 4 cm layer of paraffin was floating near the ceiling. It had probably been used to make light. Stefano claimed that it was perfect for lubricating the zips on our diving suits…an inglorious end for a historic relic.

I was enthusiastic about this dive (Fig. 7), but it’s well known that our emotions are but fleeting moments, memories recorded in our brain so that they can fill our future. 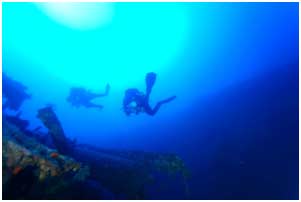 Is Cave CCR the Ultimate Challenge in Diving?

Sidemount, the Fastest Growing Segment in Diving
Scroll to top